Search for Campervan Rental in Broome 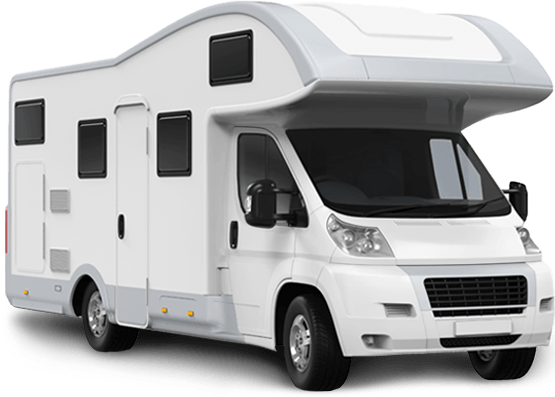 Hire a Campervan or 4 Wheel Drive out of Broome and explore the vast West Australian coastline and the Kimberley region in the far north.

Despite being one of Australia's most remote towns, Broome is well serviced for motorhome, campervan and 4WD rentals with the likes of Apollo, Britz, Cheapa Campa, Maui and Maui Elite all operating branches out of Australia's pearl capital. These companies offer a wide range of vehicles for hire, including 4 and 6 berth family motorhomes, 2 berth campervans and for those looking for a bit more adventure there are 2,4 and 5 person 4 Wheel-Drives that can take you further off the beaten track in the Kimberley.

If you are looking for a self-drive holiday from Broome DriveNow can help you research, compare and then book the right vehicle for your needs.

Since 2003 we have partnered with Australia's leading providers of campervan, motorhome and 4 wheel drive rental vehicles bringing information and pricing together to allow travellers to see what each offers and how they stack up. Every budget is catered for with luxury top-of-the-range motorhomes through to basic campers with less trimmings.

Our service is absolutely free with no booking or administration fees and we compare Broome's campervan rental providers without fear or favour so you can make an informed and unbiased choice on your vehicle. Whilst a deposit is required to secure your booking, full payment is not required until 6 weeks out from the date of pick-up.

Why use DriveNow to hire a Campervan in Broome?

Thank you for considering DriveNow in your Broome self-drive holiday plans. If you need any assistance or have any questions please contact our Reservations team on the numbers listed at the top and bottom of this page or via online chat or email.

When is the best time to rent a campervan in Broome?

During the Dry season Between May and October. The most popular months being the June-September period.

When are campervan rental branches open in Broome?

Between May and October the branches in Broome operate 7 days a week. Immediately either side of these months they offer reduced opening hours and between December and March are closed.

What is the Broome Remote location Fee?

Due to the remoteness of Broome, Campervan providers charge a remote location fee of AU$750 or AU$1000 on vehicles picked up or dropped off from there. This is in addition to any one-way fee that may be applicable.

How far is Broome from Perth?

Do Campervan rentals in Broome come with unlimited kilometres?

Yes. However some 4 Wheel Drive rentals come with a free kilometre allowance followed by per km charges.

where are Campervan rental companies located in Broome?

Driving and Parking Tips in and around Broome 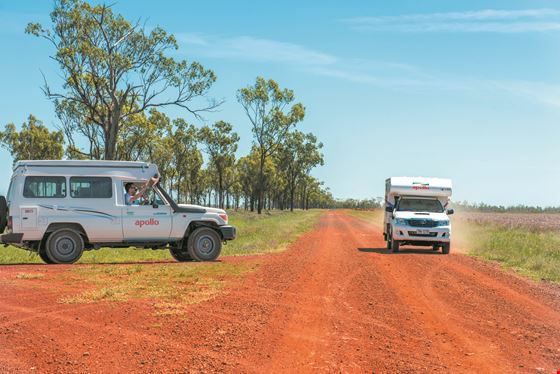 You’ll feel at ease driving a modern camper in no time!

Whether you’re embarking on your first ever campervan trip or you’re a seasoned road tripper, it can always be a bit nerve-wracking when getting behind the wheel. Don’t worry though our fleet of suppliers has a great selection of modern campervans that are a lot easier to drive than you would expect. It won’t take you long to feel at ease with the size, and power steering will make driving an enjoyable experience.

If you’re planning on exploring the vast beauty of Western Australia on your trip to Broome, have you thought about hiring a relocation camper?

For as little as $5 a day, often with fuel included, you can pick up a camper in Broome and drop it off in Perth. Or, travel further afield and head to South Australia instead and drop off your camper in Adelaide, the choice is yours.

They key is being able to be flexible with your travel plans, it’s a cheap way to explore Australia and comes about when our rental partners need to relocate campers around the country due to demand or changing seasons.

Given Broome's location in the tropics relocations from Broome going south tend to be at the end of their season, September and October and conversely at the start, in April and May heading north and dropping off in Broome. Check out relocation deals from Broome and embark on an adventure of a lifetime.

Where to Park around Broome? 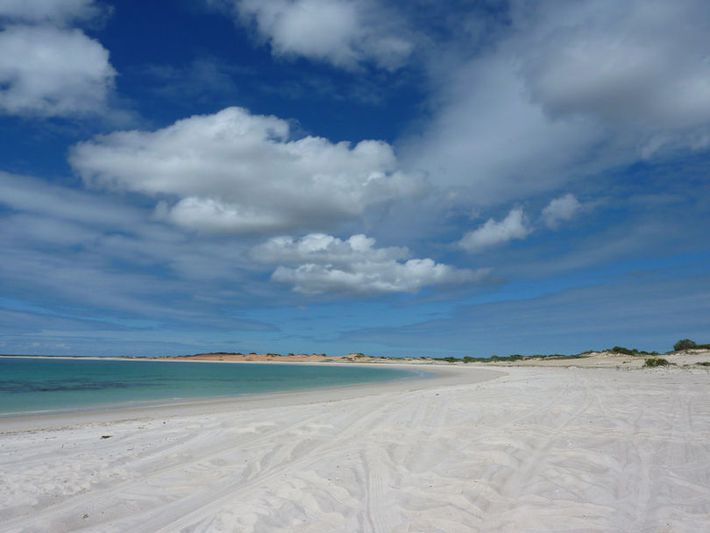 The picturesque view from Kooljaman at Cape Leveque!
Source: Flickr

Road tripping around Broome in a campervan is the perfect way to explore the abundance of natural beauty spots in this tropical paradise and there are plenty of idyllic campsites to spend the night. Just make sure you book in advance as they fill up fast. Check them out below.

Packing Tips for Your Campervan Holiday in Broome

Packing for a campervan holiday can seem like a stressful task. You’ll have a list as long as your arm but won’t want to live in a cluttered van for the duration of your trip. With DriveNow campervans, you’ll have all the items you need already provided, from bedding to cooking equipment, as well as the option to add on any additional extras. So, all you need to worry about is packing your personal belongings. One little tip from us to you is to avoid hard case suitcases as they take up valuable space.

Broome offers a tropical climate all year round

Broome is blessed with a warm climate all year round due to its tropical climate. It has two seasons, in which the wet season runs from November until April, and the dry lasting from May until October. The most popular time to visit is from mid-June to August as all the attractions are open. Thanks to its warm sunny days, Broome is the perfect escape from the cold winter months elsewhere.

Driving Highlights Not to Be Missed in and Around Broome

If you’re flying into Broome airport, your campervan will be awaiting your arrival at the branch to embark on your adventure. Once you’ve picked up the keys, it’s time to hit the road and check out these top attractions on your Broome campervan road trip. 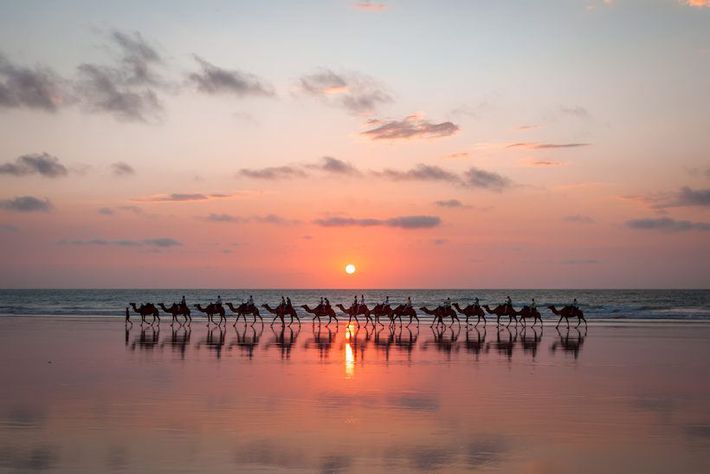 Cable Beach brings visitors from all over the world thanks to its 22km stretch of pristine white sands and turquoise waters. Take the coastal drive along Cable Beach Road and find your perfect place to stop and enjoy a day of exploring. There’s plenty to do from paddle boarding to bike riding, or you could enjoy its iconic camel rides for a different perspective of this magnificent spot.

Broome is renowned for producing some of the finest pearls in the world, so taking the short drive to Willie Creek Pearl Farm should be high on your list. Take in the beautiful sights and learn about Broome’s rich pearling history. Take a tour and become an expert in the process of modern culture pearl farming. You’ll view live oysters in their natural environment, cruise the azure waters, and see the harvesting to the creation of stunning jewellery. A must-see on your Broome campervan trip. 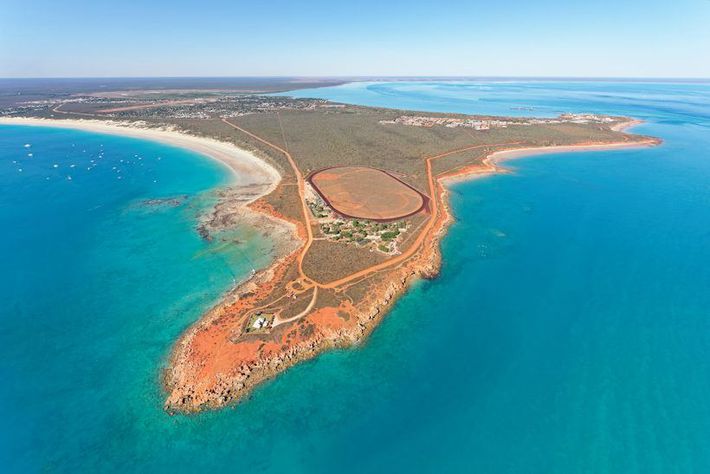 Check out the stark contrast of the red cliffs and crystal blue waters!

You can’t visit Broome without seeing the ancient dinosaur prints up at Gantheaume Point. These real prints are over 130 million years old and are preserved in the reef rocks which are only visible on low tide. You’ll also see the historical lighthouse lookout. The stark contrast of the red cliffs and the Indian Ocean makes for the perfect photo opportunity too. This majestic landmark is a short 10-minute drive from Broome.

Want to know more? Check out our articles about Broome and WA

Search for Campervan Rental in Broome