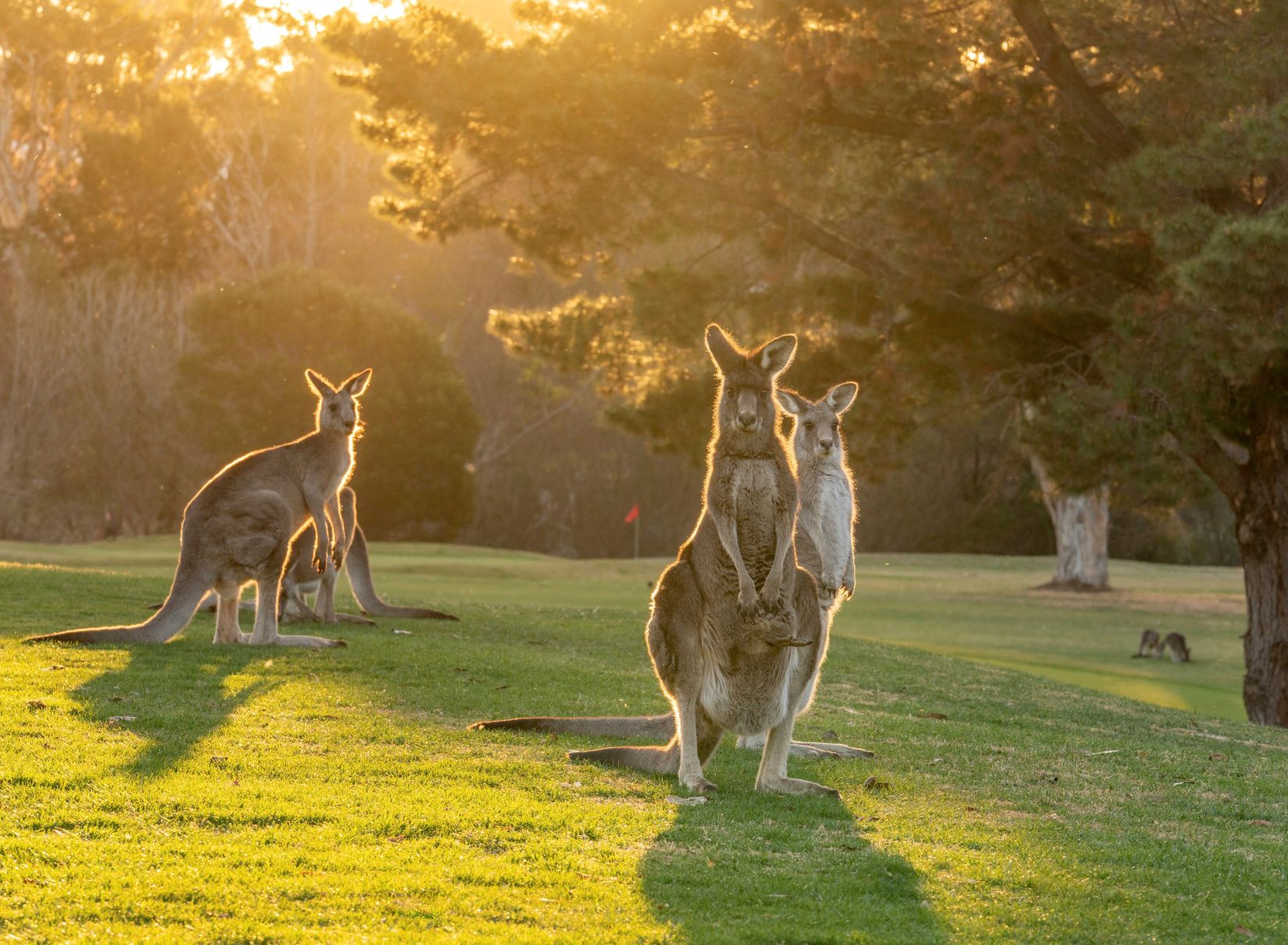 Where to see wildlife in Australia

By Shelley Richardson January 12, 2021 No Comments

>   Campervan Holiday Tips   >   Where to see wildlife in Australia

It’s exhilarating to see animals in the wild that you will never see anywhere else in the world.  Australia has some of the most unique native animals, some are easy to see, others more challenging.  Some are cute and furry, others a bit more unfriendly. The secret to successful observation is to narrow down the best locations for the time of year you are travelling.  Campsites in National Parks are always a terrific place to start and you don’t have to leave the comfort of your Motorhome/Campervan.

Most Australian native animals are protected so don’t touch or feed them.

Listed in spotting order from easy to hard.

Here is a list of just a few unique wildlife options and the locations that give you the best chance of sightings:

Fifty percent of birds in Australia are unique to the continent. So keep your eyes peeled everywhere. 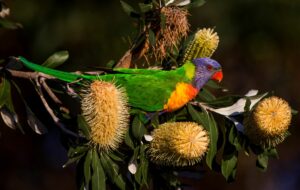 Rainbow Lorikeet – Vibrantly coloured, loud and cheeky they are not hard to spot. They will be in a flock, from Rainforests to temperate forests along the Eastern Australian coast.  You will hear them first. 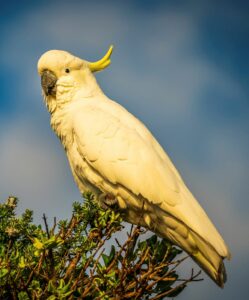 Sulphur-crested – Large white conspicuous birds with yellow crest. – loud and gregarious, they may find you before you find them, they will arrive in large flocks or pairs. – Extensively found in northern and eastern  Australia. 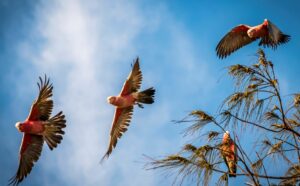 Major Mitchell – Smaller pink with a red crest and underwing – Not as confident as the Sulphur-crested cousin and doesn’t congregate in as large flocks.  Extensively found in arid to semi-arid regions of the Australian interior.  Watch out for old trees with hollows where they like to nest. 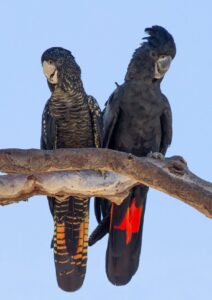 Red-tailed Black – Large and gregarious and looks as described.  While found in all states the easiest place to see them is the Jarrah and Karri forests in W.A.’s south-west. 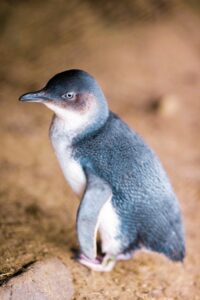 This is a very structured way to see wildlife but it’s the best thing for the penguins.  There are other places you might spot these lovely little darlings, like Sydney Harbour beaches, but they are long shots, Phillip Island is a certainty. 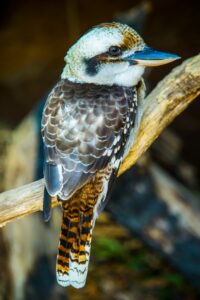 Kookaburra – They are not laughing at you but with you! – Everywhere in Australia where there are suitable trees for nesting (hollow burrows) You will see them fly to the ground for worms and insects, their favourite food. 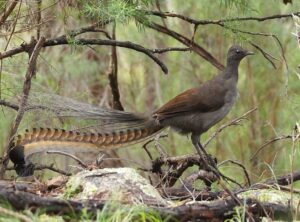 Superb Lyrebird and Eastern Whipbird – We have put these together because they are likely to be in the same area. The Lyrebird is often described as looking like a pheasant, the male has a large tail, ornate when on display.  Ground dwelling and blends into moist forest floors the Lyrebird’s claim to fame is its ability to mimic other birds and animals. The Whipbird offers the quintessential sound of the Australian bush, they are seldom seen but always heard.

– when bushwalking in South Eastern Australia and Tasmania, if you hear a Whipbirds call, stop and sit quietly, watch the ground for the Lyrebird and branches for the Whipbird. 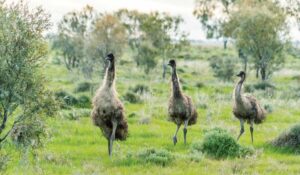 Emu – The largest of Australia’s birds, although the Emu is not uncommon and is widespread throughout Australian states (except for Tasmania), they can be anywhere that there is open savanna or sparse forests.  You are most likely to spot them when you are driving, keep your eyes open on country roads. 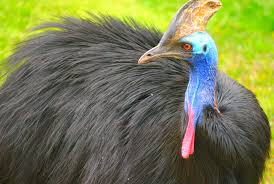 Cassowary – The shorter more heavily built cousin of the Emu, the Cassowary is found only in the dense rainforest of northern Queensland. You will need to sit quietly and wait, they are wary and solitary, also territorial so ask locals if any live in the area before you wait for hours.

A lot of mammals are nocturnal, so campgrounds in National Parks give you a great opportunity to lie in wait. 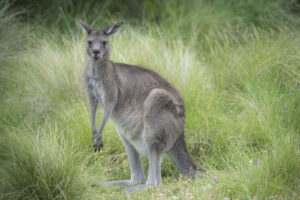 There is nothing more joyful than seeing Roos in the wild. Between all the varieties of Kangaroos and Wallabies that live in Australia, outside of the big cities, you will never be far from one of these guys.  They love golf courses, farmland and everything in between. Most are curious of humans but don’t imagine just because they don’t hop away immediately that they are friendly, they have few predators, hence their confidence but they are wild animals.  When driving in the country be on the lookout, be especially careful when you see a mob on the side of the road. 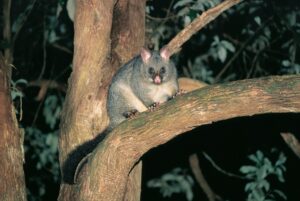 Possum Brushtailed/Ringtailed – Although there are 27 different species of possums and gliders in Australia the Brushtailed and the common Ringtailed are found in nearly every city, town and campsite of Australia.  These guys love to live near people where food is easy to come by.

To spot one of these cute little nocturnal mammals sit outside your camper with a torch and watch the trees, power lines and bins,  it won’t take long. 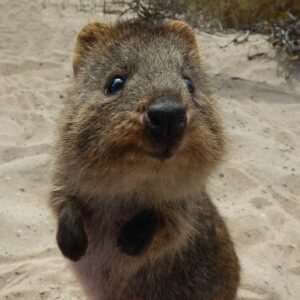 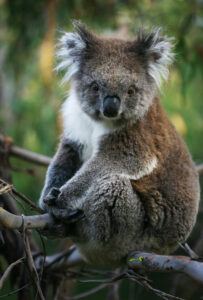 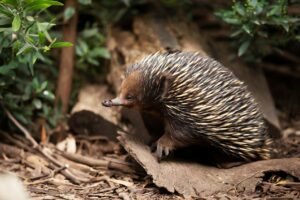 Echidna – Australia’s most widespread mammal, however, is quiet, reclusive and extremely well-camouflaged meaning they are very difficult to spot in the wild.  Looking for their food source, termites and insects around the roots of trees is your best option and if you do that on Kangaroo Island, South Australia not only will you tick off a lot of other native wildlife you may just spot this most elusive of creatures.

Platypus – As with Echidnas the Platypus has an extensive territory from highland cool streams in the Snowy Mountains to warm rainforest streams in the Queensland tropics, with the added issue of being mostly nocturnal. 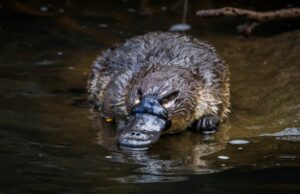 Wombat – Not really that hard to see if you are in the right place.  These rolly polly little fellas are technically nocturnal but are often seen during the day. They love the sweet grass shoots on the side of the road so unfortunately, the first one you see might be roadkill.   But you will know you’re in the right area. 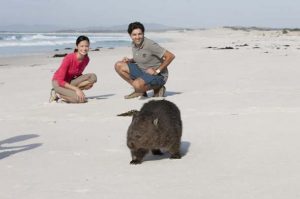 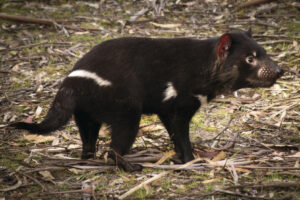 Maria Island National Park, Tasmania – get the ferry from Triabunna, it’s a direct drive on the A3 from Hobart, only 86km (75 minutes) away.  Maria Island is a ‘must-do’ for all wildlife enthusiasts. Click HERE for more information.

Ninety-three percent of the reptiles and amphibians you might see are uniquely Australian and although eighty percent of the worlds deadliest snakes live in Australia you are unlikely to see them. 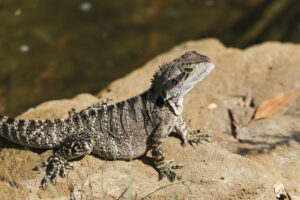 Water Dragon – In the summer months in the streams, rivers and swimming pools of the east Australian seaboard these magnificent little miniature dinosaurs are prolific.  Like all reptiles, they can’t regulate their own body temperature so you will see them sunning themselves on rocks near the water, if you get too close they will scurry away. 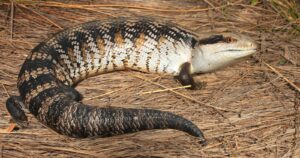 Blue Tongue Lizard – It’s easier to tell you where this largest member of the skink family doesn’t live –  Arid central and the west coast, otherwise wherever there is open country with a lot of leaf litter to forage for dinner and logs and rocks to sleep under.  If you come across this much-loved lizard he will probably open his mouth wide and stick out his blue tongue,  This is a scare tactic, ‘blueys’ are slow-moving and the most aggressive they get is eating a snail. Australian’s generally consider it a sign of a healthy garden to have a bluey in residence.

Freshwater (Johnstone River) Crocodile – ‘Freshies’ are smaller and less dangerous than Saltwater ‘Salties’ Crocs. So, much more fun to see in the wild.  Still take care. 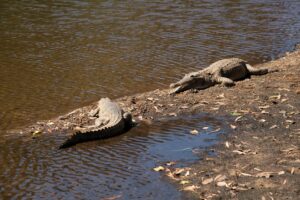 Best places to view them safely.

We strongly suggest you don’t go out searching for crocs on your own.  Even though ‘Freshies’ are not man-eaters they can be found in the same areas as ‘Salties’ and those prehistoric eating machines are to be avoided at all costs.  Let an expert either guide you or go to a reptile park where you can view them safely.

Sanctuaries are also good places to see snakes and although most are harmless knowing the difference between a ‘python’ and an ‘eastern brown’ is best left to the experts. If you come across a snake while you are out bushwalking just stand still and let it slither away.

Canberra is almost famous for its winter chill factor. However, don’t let that stop you from checking out some of the best sights near the Australian capital this winter. The…

The Chair’s Where? Coolum Beach, Queensland

Victoria is home to some of the best camping areas in Australia. From the dramatic cliffs along the scenic Great Ocean Road to the impressive mountains in the northeast, we’ve identified eight…