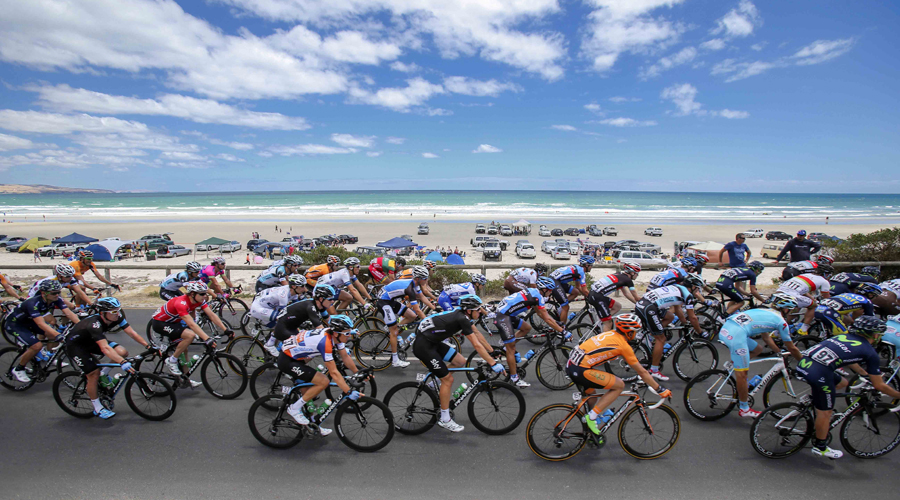 The Santos Tour Down Under is a world-class, international cycling event. The nine-day festival celebrates everything to do with cycling. Athletes travel from all over to cover 860 kilometres in an attempt to win Australia’s great cycling race.

There’s no reason why you can’t explore attractions along the route when you’re not watching the race.

Here are our top picks for what to do while tagging along for the Santos Tour.

The People’s Choice Classic sees competitors ride around the city centre. While you’re in the area, it’s definitely worth checking out iconic attractions like Victoria Square. This central park is a great place to explore on foot. You can either bring your own picnic or check out one of the many trendy cafes nearby. At the west side of the square is the Adelaide Central Market, which is South Australia’s most visited landmarks.

Just an hour north of Adelaide is an entire farm dedicated to one of the world’s most versatile herbs. Lavender is said to deliver many benefits for the mind and body. At the Lyndoch Lavender Farm you take take a guided tour to learn about its uses. You’ll also explore how workers on the farm cultivate it. Once you’re done, sit down at the cafe and enjoy a lavender biscuit and tea. It’s quite delicious!

Drive half an hour from Victor Harbor and you’ll come to the famous Murray Mouth, where the Murray River meets the sea. You can relax on the beach with a walk or fishing. You can even jump on board a cruise that takes you up and down the river, where a guide fills you in on the local history and the ecosystem. You’ll be treated to scenic views of the Coorong sand dunes and you may also spot some wildlife, including birds.

Hikers will love this gorgeous slice of paradise near McLaren Vale. Choose from diverse walking tracks that take you to cliff tops down rivers and even into rock pools. In whichever direction you head, the views are magnificent. The Onkaparinga River is South Australia’s second longest river. It attracts all sorts of wildlife that you may even get a glimpse of during your travels.

The caravan and campervan lifestyle is popular as ever

DID you know that 7 million Australians have visited a holiday park in the past two years and that 9.3million plan to holiday in the caravanning and holiday parks…

Are you ready to taste regional Victoria? Farm to table dining is no longer exclusive to regional restaurants with Melbourne’s top chefs championing Victorian produce, according to the Visit Victoria…

The day has finally arrived when Victorians can officially look forward to direct flights three times a week to Margaret River. Exploring one of Western Australia’s most diverse destinations just…