With Sydney set to throw the world’s most exciting New Year’s Eve party party featuring outstanding fireworks displays, we’ve asked the Destination NSW team to reveal some of the city’s best vantage points and parties for revellers to ring in 2018.

As NSW Minister for Tourism and Major Events Adam Marshall says: “Every year Sydney erupts into a kaleidoscope of colour as the nation’s biggest-ever fireworks display welcomes in the New Year. With many locations across the harbour foreshore to view the fireworks, as well as festivities and parties to experience, celebrating New Year’s Eve in Sydney is another great reason to book a holiday to NSW.”

Here are some great options to watch all the action 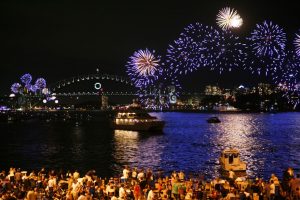 Campbell’s Cove is on Hickson Road north of the Overseas Passenger Terminal, offers front row views of the Sydney Harbour Bridge and Sydney Opera House. Revellers are advised to arrive early as the area usually reaches capacity at around 4pm. Admission is free; Opening times: 9.30am 31 December to 1am 1 January.

To nab a spot on the forecourt of the Sydney Opera House it’s best to arrive as early as possible as this iconic spot reaches capacity early in the day. Food and drinks are available for purchase onsite. Admission is free; Opening times: 7.30am 31 December to 1.30am 1 January.

Mrs Macquarie’s Poinnt is one of the most popular viewing spots for New Year’s Eve due to the location’s fantastic views. This vantage point also offers food and drinks available for purchase onsite. Admission is free; Opening times: 10am 31 December to 12.15am1 January.

This year, celebrate New Year’s Eve at Sydney’s Barangaroo Reserve. The Reserve is one of the best-value ticketed New Year’s Eve venues on Sydney Harbour. The spectacular harbourside location, superb views of the sunset and the western façade of the Sydney Harbour Bridge make Barangaroo Reserve the ultimate spot to enjoy the 9pm and midnight fireworks. The site will feature light entertainment, picnic spaces, food and beverage hampers available for purchase and family-friendly alcohol-free zones, as well as licensed areas. Tickets start at $40 for adults and from $5 for children. Juniors under two are free. Tickets are available for purchase from ticketek.com.au. Admission is ticketed; Opening times: 6pm 31 December to 12.45am 1 January.

Viewing spots around Cockle Bay are prized locations and this year will be no exception. With a free program of live music and light shows from 7pm, as well as the famous 9pm and midnight fireworks, Cockle Bay is set to be one of the most exciting, free family-friendly locations to celebrate the end of 2017. Admission is free; Opening times: 11am 31 December to 1.30am 1 January.

Shark Island will be transformed into an island paradise this New Year’s Eve. Guests will be treated to a live DJ and some of the best views of Sydney Harbour. Dance to the tunes of DJ Adi Toohey and Sydney’s own Recess DJs. Sliders, fries and desserts will be available for purchase from Slippin’ Sliders. Tickets start from $232 for adults and from $165 for children. Children aged under four are free. Tickets include ferry transfers to and from Rose Bay.

Sydney’s other islands including Cockatoo Island, Goat Island and Clark Island offer a range of exciting New Year’s Eve events. For a lively celebration book a ticket to enjoy a three-course meal and Garden Party on Clark Island with tickets priced from $395 for adults and $242 for children. Children aged under four are free.

For a ‘ferry good view’ of the fireworks, jump aboard an iconic Sydney Harbour Ferry from Manly or Rose Bay Wharf for a front row seat of the fireworks. Exclusive tickets are now available for the Harbour of Lights Parade which gives visitors a tour of the Harbour and the closest views of the 9pm and midnight fireworks. Guests can pack a picnic to enjoy on-board with tickets starting from $150 for adults and $125 for concessions.

Sitting 47 floors above the city and offering 360 degree views from the deck of a revolving restaurant, O Bar and Dining is one of the most exclusive places in Sydney to see in the New Year. Choose to have an eight-course degustation dinner or rolling chef’s tapas taking in Sydney from all angles in the unique circular dining room. The cuisine is based on chef and owner Michael Moore’s healthy eating philosophy and complements an extensive wine list and innovative cocktail menu of modern, classic and vintage drinks. Tickets start from $475 for adults (18 years+ only).

Portside Sydney will host an exquisite ‘La Riviera’ themed party this New Year’s Eve with open-air dining and uninterrupted views of the world-famous 9pm and midnight fireworks on the Sydney Harbour Bridge. Guests can enjoy free-flowing French Champagne, cocktails, live food stations and canapes by Lauren Murdoch all night as they enjoy the live music beneath the stars, under the sails of the Sydney Opera House. Tickets are priced from $695 for adults (18 years+ only).

While demand is high, revellers can still book a hotel room in the city to ring in the New Year. Travellers are advised to book fast as hotels will be at capacity on 31 December.

Skydive in the best ‘drop zones’ Where: Toogoolawah, 120km north west of Brisbane THE blue skies in Toogoolawah aren’t just “famous for fun”, but are also skydiving central. People travel…

Road trip Sydney and beyond – 5 great drives this summer

If you are to Google Earth our beautiful country you would quickly realise we’re spoilt for choice when it comes to road trips throughout our enormous continent. You can get…