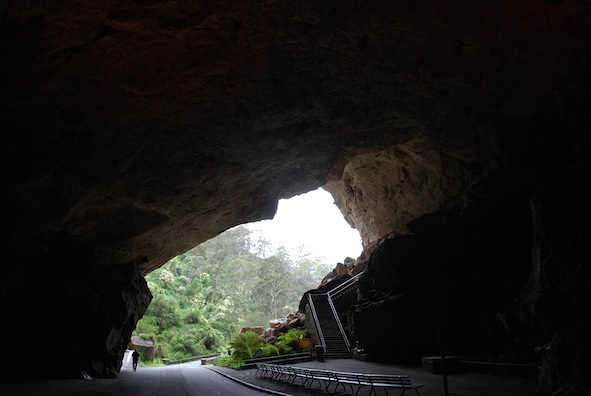 Angela De Lyon grabs a rental car in Sydney and heads down a notorious road offering not only spectacular views but also some dark and spooky history.

THE steep descent from the upper Blue Mountains at Mount Victoria into the Lithgow basin has always been a notoriously hazardous one, with more than its fair share of accidents, particularly among truck drivers. But could the high fatality rate on Mount Victoria Pass be due to more than just dodgy road conditions and speed?

According to legend, this strip of highway is haunted by a rather nasty spectre – the Lady in Black. Since the mid-19th century, travellers have spoken of a mournful figure dressed in black that clings to the back of vehicles, causing drivers to plummet to a fiery death. Immortalised in Henry Lawson’s poem, The Ghost at the Second Bridge, the phantom is believed to that of Caroline Collits, a local lass from the Hartley Valley whose beaten and battered body was found beside the road in 1842.

Rain has been falling as I take on this notorious stretch of road, and an eerie mist swirls around my tyres. But as I approach the peak of the Blue Mountains at Mount Victoria, the glorious views across the Hartley Valley take away any feeling of trepidation as I begin my slow and steady descent. This really is a gorgeous, unsung part of outer Sydney – mind-blowingly beautiful, tranquil and oozing with historic charm.

At the bottom of the hill – yes, I made it without incident – I swing left to explore the historic Hartley Valley. I wind my way through emerald meadows flanked by the dramatic escarpment to Hartley Vale, where the most prominent building is historic Collit’s Inn, dating to 1823 and once home to the young girl who is said to haunt these parts. Recently renovated, the inn is once again open for passing travellers, providing comfortable and atmospheric accommodation both in the inn and its quaint stables.

Continuing back to the main road, I turn right into the historic site of Hartley, a perfectly preserved village from colonial days. There are 17 buildings of interest in the town – take your time to wander around, absorbing the ambience. Tours run by the National Parks and Wildlife Service are available of the old Courthouse, bringing to life the hardships of the early days of the colony.

Beyond Hartley, the highway narrows as the road approaches Jenolan Caves, my final destination for the day. Hairpin bends with dizzying drops into densely vegetated chasms take all your concentration; and passengers, beware – car sickness is practically guaranteed!

The arrival into the legendary Jenolan Caves – the oldest cave system in the world – however, is truly spectacular, with the approach through a massive tunnel known as The Grand Arch revealing historic Caves House in all its faded, Victorian elegance. This wonderful old hotel, now rather shabbily run by the NSW State Government, has some spooky stories of its own, with at least five ghosts said to haunt its creaking hallways.

The caves themselves are also said to be haunted – not by an evil presence, but by the protective gaze of one of the caves’ original caretakers, James Wiburd. Lantern-lit ghost tours of the caves are extremely popular and a lot fun – and the perfect precursor for a night sleeping in a haunted hotel!

Great Ocean Road remains one of Australia’s treasures, let alone Victoria’s, and as the famed Rip Curl Pro descends on Bells Beach it’s well worth planning your trip to make…

Places to visit this summer in Victoria

Victoria in the summertime is magnificent. It’s glorious and there’s no place you’d rather be than enjoying the sunshine while hiking through pristine forest or swimming at one of Melbourne’s…