Four great things to do in South Australia 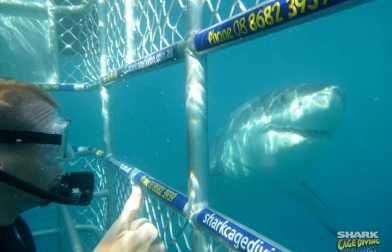 From dives with Great White sharks, cave and opal mine explorations to some of the most exquisite and beautiful wine regions on the planet. Hands up who wants to visit South Australia?

Swim with the Great Whites

IT’S often said that Great White sharks are the most misunderstood creatures of the ocean – yet that still doesn’t change the fact that you wouldn’t want to be stranded in open water with one nearby!

In Port Lincoln, however, you can safely get close to these apex predators in their natural habitat.

From the security of a cage, hold on tight as Great White Sharks swimming around the waters off South Australia interact with other members of their species and search for food. And take a good look at the human zoo in the cage.

Port Lincoln also one of the few places in the world – and the only location in Australia – where these one-day shark cage diving charters are run.

They grow to an average of 4.6 metres in length and you’ll definitely catch more than a quick glimpse of the 300 serrated teeth that line these creatures’ mouths. The great thing about this once-in-a-lifetime experience is that you don’t need a diver qualification or previous experience.

BELOW the surface of South Australia’s only world heritage site lays an ancient environment of stalagmites and stalactites.

These natural ornaments formed as water and minerals slowly seeped down from the earth above the caves more than half a million years ago.

The unique site continues to fascinate palaeontologists across Australia, finding itself at the centre of research.

The Naracoorte Caves contain Australia’s largest and most diverse collection of fossils and mega fauna and tour guides will eagerly point to fossils of extinct species dating back to 60,000 years ago.

Take your camera on a guided tour through the stunning Alexandra Cave, a beautifully decorated area with helictites that twist and defy gravity. Watch endangered Southern Bent-Winged Bats leave Blanche Cave at dusk in summer while in winter you’ll spot them hibernating and hanging from the ceiling of the cave.

Meanwhile, those seeking a challenge will find one crawling and squeezing through rocky tunnels with adventure cave tours.

FAMOUS for its vineyards, mining history, cafes and galleries, Clare Valley also has some of the best tourist trails in the world, which take in vineyards and farmland views and historic stop-off points along the way.

Damian Cerini from cycling tour company Tour de Vines says the Clare Valley’s flat landscape makes it the “perfect region” for visiting cellar doors on a bike. With more than 40 wineries within just a few kilometres, the Riesling Trail (25-30km) is built on the old rail line.

Highlights include historical stops such as Horrocks’ Tree, Sevenhill Cellars, the Little Red Grape complex, Annie’s Lane, and after some gentle pedalling, a tasty share plate and wine tasting experience awaits at O’Leary Walker Wines. “Combine that with some gentle exercise while you breathe in some fresh country air and it’s a terrific way to explore a wonderful part of the Clare Valley,” Damian says. “It’s all about having fun and enjoying Clare – better still, there’s no Lycra required!”

A food market that rules them all

THE Adelaide Central Market is considered the food centre of South Australia, the very heartland of the supply chain from the farm gate to consumer.

Stallholders proudly say it’s the only market of its kind in the country. Its colourful and aromatic atmosphere draws 8 million visitors a year, tempting them with food from a range of cultures, including Italian, Greek, Russian, Asian and Middle Eastern.

Sydney summer events – 5 reasons you have to be there!

Longer days, warmer nights, BBQ season- summer is when Sydney really shines. Not only do the stunning beaches and coastal walks look their best in the glorious sunshine, but the…

END_OF_DOCUMENT_TOKEN_TO_BE_REPLACED

So you’re looking for the right gear and gadgets as a business traveller on the road post COVID-19? Try these 5 recommendations from the DriveNow car rental team. Stylish Victorinox carry-on…