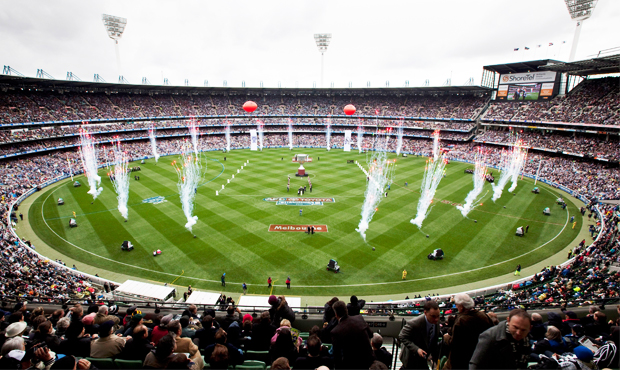 It’s no secret we Australians are absolutely crazy about our sports and springtime is arguably the most action packed time of the sporting calendar. To get into the sporting spirit, here are five huge upcoming events that everyone can cheer about.

Now complete with a pre-final public holiday, the AFL Grand Final weekend will see fanatics swarm the city on Grand Final eve for the annual parade. Here, you can catch an up close view of players from the two competing clubs as they eye each other off before Victoria’s largest sporting event at the world-renowned Melbourne Cricket Ground. AFL is the unofficial religion of this southern state, so if you plan on visiting make sure you book accommodation early. On the big day, the whole of Melbourne buzzes with a festival-like atmosphere, suburban verandas proudly draped in team colours while out back the beer flows and sausages sizzle. If you’re not lucky enough to be heading to the game, be sure to arrive at the pub well before the opening bounce to secure yourself a prime viewing spot. Alternatively you can catch the game on the big screen at Federation Square with thousands of other crazy fans.

The day after Victoria’s premier event, down some Berocca and bounce back into sports spectator mode because all eyes will be on Sydney’s ANZ Stadium which plays host to the NRL 2015 Grand Final. The occasion is more of a week-long celebration, with a live screened Grand Final Breakfast function attended by both teams and hundreds of guests in the days before. The Sydney Harbour Bridge is lit up each night in the countdown to the big day with 80-metre high projections of the competing teams. This year, the Grand Final will be marked by an NRL first, with Darling Harbour the home to a new interactive fan engagement centre where visitors can meet players from all 16 clubs and catch a glimpse of the two competing teas as they prepare to go head to head. Skills tests, giveaways and free entertainment will also be available to fans of the game.

For petrol heads who can’t get enough of the smell of burning rubber, the Bathurst 1000 is widely regarded as the pinnacle of Australian Motor Sport and is known as the “The Great Race” among motorsport fans and media. Run exclusively for V8 supercars, the four day event sees fans pitching camp under the stars on Mount Panorama for a weekend of high octane fumes, cars racing at dizzying speeds and of course, plenty of beer. The race culminates with the winner being presented with the coveted Peter Brock Trophy, introduced in 2006 to commemorate the death of supercar legend Peter Brock, who won the event nine times.

Touted as ‘the race that stops a nation’, the Melbourne Cup is a heart-stopping event accompanied by yet another public holiday that is celebrated throughout Victoria. While the carnival runs over a week, the big race is held on the first Tuesday of every November. In nearly every home, workplace and local pub, all eyes on the room will be glued to the TV for about three and a half minutes, followed by gasps of elation, but mostly sighs of disappointment. The event sees some 110,000 people attend, some in formal race day wear and others in amusing costumes, but even if you are not terribly fond of racing or betting, the people watching opportunities are endless.

Considered one of the most difficult sailing races in the world, the incredible Sydney to Hobart race covers nearly 1200 kilometres through the Sydney Headlands, across the Tasman Sea and to the Derwent River before the boats cross the line just in time for New Year’s Eve celebrations. The yachts come from all over the world, as do competitors, hailing from the UK, Singapore, Hong Kong, Germany, Cyprus and New Zealand. With the firing of the starting cannon, around 100 yachts will set sail in front of a crowd of 600,000, with the best vantage points including North Head and South Head in Sydney. Hobart’s historic waterfront plays host to a post event reception and spectators are encouraged to head there for celebrations after welcoming the yachts at Battery point.

THE drive from Mossman to Cooktown is brilliant. It isn’t an easy drive, but still it’s really worth the while. Make sure you stock up on everything before you head…

END_OF_DOCUMENT_TOKEN_TO_BE_REPLACED

New South Wales is home to so many pubs that you’ll probably never get the chance to visit them all. Add these five historic New South Wales pubs to your…

Looking for the best Gold Coast restaurants? Read on

The Gold Coast is most famous for its sunshine, sandy beaches and busy nightlife. But you may not know that Gold Coast restaurants are some of the best going around. There…